WHAT’S IN THE BOX

The all-new King Cobra features American Stainless Steel construction, a heavy duty frame with a fulllug 3 in. barrel, and the 6-round capacity that differentiates Colt small frame revolvers from the competition. The King Cobra also features the same user-replaceable front sight and Linear Leaf spring trigger (LL2™) as the rest of the Cobra family.

Colt® introduced the Cobra revolver in 2017, and now, Colt is ready to unveil its bigger, more-powerful brother – the King Cobra™ Revolver. 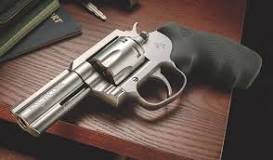 The Long and Short

It’s size, trigger and sights coupled with excellent fit and finish makes this a desirable revolver for our time. With revolvers making a comeback, so has Colt. If collector interest in Colt double-action revolvers is any bellwether of demand, the King Cobra will surely be a success.

First introduced in 1986, the Colt King Cobra is a medium frame double-action revolver featuring a six round cylinder which was designed and produced by the Colt’s Manufacturing Company and marketed to law enforcement agencies and civilian firearms enthusiasts.

Despite its outward similarity to the Colt Python,[2] the King Cobra design is based upon that of an earlier Colt model, the venerable Trooper MK V, improved with the addition of a heavier-duty barrel, full barrel length cylinder ejection rod protection shroud, and a thicker solid rib on top of the barrel. The King Cobra was introduced in 1986, discontinued in 1992, and returned to Colt’s product line in 1994. Dropped a second time in 1998, it was not reintroduced until 2019 as a .357 Magnum, three inch barrel variant of the 2017 Colt Cobra.[3